Geoplin signed a contract for natural gas from Algeria

Today in Algiers, Matija Bitenc, General Manager of GEOPLIN, and Samia Hamadache, Director Gas Marketing Division of SONATRACH, signed a mid-term contract for the supply of natural gas from Algeria to Slovenia. The agreement represents an important step towards ensuring further diversification of natural gas procurement sources. By signing this agreement GEOPLIN further increases the reliability of natural gas supply for its customers.

GEOPLIN d.o.o. Ljubljana and the Algerian Group SONATRACH concluded an agreement on the supply of natural gas for a period of three years, namely from 1 January 2023, when deliveries will begin, until 31 December 2025. The transfer of natural gas from Algeria to Slovenia will take place via gas pipelines via Tunisia, the Mediterranean Sea and Italy up to the entry point in the Slovenian gas pipeline system Gorica - Šempeter. The concluded mid-term agreement is the result of excellent past cooperation between the companies GEOPLIN and SONATRACH in the years from 1992 to 2012 and the outcome of several months of talks and cooperation between the two companies. The signing ceremony of the supply contract took place in the presence of Bojan Kumer, Slovenian Minister for Infrastructure, Tanja Fajon, Slovenian Minister of Foreign Affairs, and Mohamed Arkab, Algerian Minister of Energy and Mining of the People's Democratic Republic of Algeria. This year, it has also been 30 years since the Slovenian ratification of the Agreement on the Establishment of Diplomatic Relations between the Republic of Slovenia and the People's Democratic Republic of Algeria, which marked the beginning of economic co-operation between the two countries.

“The agreement on the supply of natural gas from Algeria is of strategic importance for GEOPLIN, which supplies natural gas to Slovenian industrial consumers and natural gas traders, as it represents a further diversification of GEOPLIN'S already diverse portfolio of natural gas procurement sources and routes,” emphasized Matija Bitenc, General Manager of GEOPLIN. 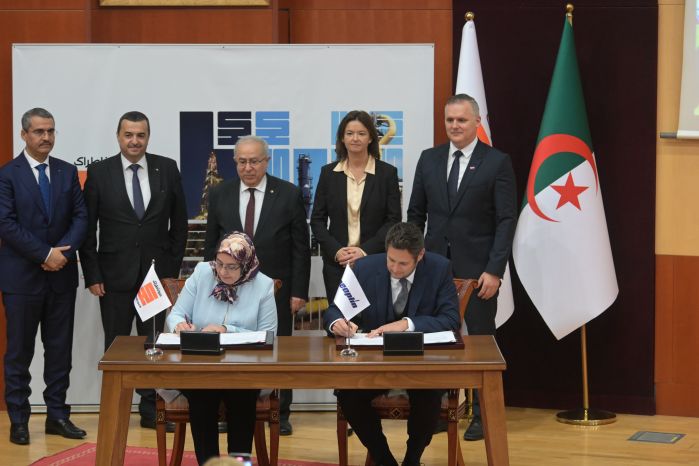 ‹ Back
Next news: Information of the 50th General Meeting of Geoplin ›